I made Herself very happy this morning.

Believe me, this is no small feat.  After forty plus years of marriage though I am beginning to learn the tricks.

Last month I wrote a wee brainfart [please note how I remembered I had written it?] about the problems I had been having with lighters, and in particular Herself’s one.  Now one of the comments – by Mudplugger – mentioned a Ronson Comet, just in passing. 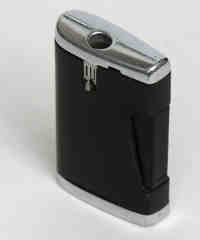 The Ronson Comet fulfils both criteria and what’s more I used to have one.  I never throw anything away so my old one has to be around the place somewhere.  I spent the next few days rooting though old boxes and the backs of drawers as I know I had seen it not too long ago and could picture it vividly.

I couldn’t find it.

Herself continued to bitch about her current lighter which was always out of gas, or the fucking flint had jammed again.  It was one or the other on a daily basis.  Something had to be done.

I searched eBay and what do you know…… I found one.  Well there were a few but they were classing them as an antique with silly prices to match.  There was one though for just a few squids so I ordered it.

It arrived this morning.  I tore open the package and there was the Comet.  It was very slightly different from mine in that the side lever was black not white and the gas nozzle was covered by a plastic flap and not the little screwy plug that always gets lost.  I pressed the button and a flame shot across the room.  It works!

I brought it up to herself in the attic.  She took a glance at it and said that she remembered I had one of those and where did I find it.  I told her how I couldn’t find it and that I had bought one at great expense and especially for her.  Yes – I know how to earn brownie points.

Does it work, says she.

I pressed the lever and out shot the flame.

Her face lit up.

I doused her hair but she was oblivious to the stench of burning face and hair – she was beaming.  Brilliant!  Fantastic!  Great!  She stopped short of Awesome though, which was as well as I would have lit her up again.

Life is peaceful now.  No more calls for gas or flints.  Herself is happily working her way through a couple of packs of Silk Cut.

What’s the betting my original one will turn up in a few days when I’m not looking for it?