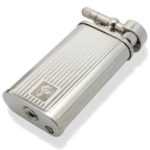 I have two lighters.

Or, to be precise, I have one and Herself has the other.

My choice of lighters was determined by a few simple factors – they had to be gas, flint, reasonably priced and in Herself’s case hadn’t to involve any flicking.  She doesn’t do flicking.

I chose a  Peterson pipe lighter which was grand.

The first one I got fell apart after a while.  I would  have returned it but I had attempted a few repairs myself which somewhat invalidated any guarantee.  I bought another.

That broke too, but had lasted just long enough to be out of guarantee.  I bought yet another one.  Surely you must admire my dogged persistence?  Anyhows, that one has been working perfectly ever since [which probably ensures that it will break down tomorrow!]. 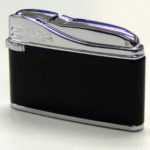 The other lighter which I got for Herself is a Pierre Cardin.  It’s a nice lighter that looks like the old Ronson and it fulfilled her requirements – gas, flint and a pressy button top with no flicking involved.

The fucking thing has given me grief ever since.

The first minor problem is that it doesn’t hold much gas [a bit like Herself].  That’s no bother as I just have to keep filling it.

The second problem is the flint and that is the real fucking headache.  The damned thing keeps jamming.

The mechanics are quite simple – a tube runs up through the body and ends just below the flint wheel.  Stick the flint into the tube and then push it up to the flint wheel with a spring on a screw.  The spring presses the flint against the wheel and all’s well….  Except that it isn’t.

On a frequent basis, the flint jambs.  The buttony thing on top just locks solid and I hear my name being shouted by Herself with an unlit cigarette in her mouth.  Not a pretty sound.  You would think it would be a simple job – just unscrew the spring and the flint will fall out?  Hah!  Much too simple.  Not only does the flint not fall out but even slamming the yoke on a hard surface won’t budge it.

So I start sticking probes and things up the flint hole and wiggling them around in the hopes that I will dislodge the flint.  That rarely works.  I can’t press the flint out from the other end as the striker wheel is in the way.  It may be possible to dismantle the top mechanics but I haven’t discovered how.  Yet.

This goes on for a while, slamming the cursed thing off a table and wiggling probes, accompanies by a lot of loud choice words.  Usually one of two things happens.  Either the flint rights itself, or I stick another flint in behind it and don’t tighten the spring so much.

It really pisses me off.

I think I’ll toddle over to eBay and see if I can pick up a reasonable Ronson…….