I started this effort back in October 2006.

In 2007 it won the Eircom Golden Spiders award – one of only two such awards that were given.

2007 was also the year it featured on RTE's "Capital D" programme.

In 2008 it was a Finalist in the Digital Media Awards and winner of Best Personal Blog in the Irish Blog Awards.

2008 was also the year the the book "Head Rambles" was published [to a resounding roar of indifference, and now sadly out of print].  It did however give me the title of "Ireland's Most Cantankerous Auld Fella". 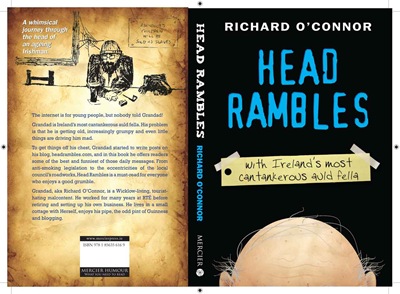 Things quietened down in the years 2009 to 2011, reaching the Finals in the Irish Blog Awards each year.

in 2012 it won Best Humour Blog and Best Blog Post in the Blog Awards Ireland.