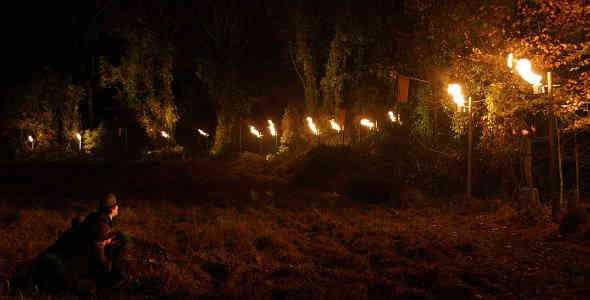 Yesterday morning I came off the A11 (that’s the main road that runs from Norfolk to England) onto the backroads of the Norfolk/Suffolk border Badlands. I was on my way to visit “Dirty Diesel” and her husband, “The Worlds (former) Greatest Mechanic” who had been holidaying in the Kingdom of Bohemia and who’d kindly brought me back several cartons of cigarettes, traditional Czech ‘caporals’ (for the tobacco geeks among us: “Start” brand -which has now been taken over by Chesterfield).

Coming round the final bend before the village I found the road blocked by two tractors, and from behind some hay bales several rustic looking types with shotguns. At first I assumed it was the tradition Norfolk welcome for the Google Street View Car . After having stated my (un)lawful business and being allowed to pass, albeit grudgingly, I drove down the main street gloriously monosyllabically called simply ‘The Street’; Norfolkers having no truck with fancy things like street names and anyways after you’ve christened the pub ‘the Nelson’ you kinda run out of famous dead people to name other stuff after here.

The place was deserted and the cold miasma of F E A R permeated, swirling around the shuttered windows, the barricaded driveways and barred front doors. Many houses had a large dog chained up out front. I’m sure I saw at least 2 shotgun barrels and one crossbow poking out through gaps in the plywood boardings. It all resembled a mountain village in Transylvania the morning after Max Factor announce the invention of a Sun Block 5000.

Of course I’m talking bollocks. Total and utter dingo’s kidneys. I came round the bend before the village – behind a tractor as the local bylaws dictate – to find not a barricade but a sign saying ‘Do you drive slow in our village’ (btw in the Norfolk dialect ‘do’ is an imperative not interrogative) and a discarded handwritten ‘Free’ sign left after some one had grabbed that broken lawnmower. The place was as ever. People on The Street (I wasn’t joking about that) having a ‘mardle’ (Norfolk for a chat), bored housewives in Fitbits® and bits of Lycra® jogging, whilst wondering if they could afford to go to a British hospital for the next boob job after BREXSHITE. Sounds of GTA from every bedroom window of every kid at home during the ‘Skool’ holidays on his Xbox. People shopping at the make shift ‘stalls’ outside every other house in the village honesty-boxing LOCAL produce. Everything was what passes for ‘normal’ in Norfolk. People going to The Nelson for a coffee (the nearest Starbucks is in Diss , nearly 6 whole miles, 2 centuries of Darwinism and a passport check away).

Yet according to the Bestes Frau In The World’s “Brexiteur, Capnophobe & Homoeopath Daily” the COMMUNITY IS TERRIFIED. Not just ‘anxious’, not ‘nervous’ and not even ‘frightened’,  No they are TERRIFIED. Sales of toilet roll at the village store (if there was one still) must have skyrocketed.

The reason for their ‘terror’ is the, I agree, shocking stabbing to death of an elderly, much loved, local dog walker: (online version without the ‘terror’) 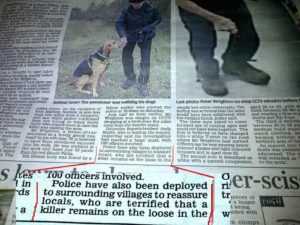