Yesterday was a momentous day.

Daughter called in with Squidge, the youngest granddaughter, and the inevitable happened: they left the door to the garden open.

Cat saw his chance and made his first steps into the Great Outdoors.

Incidentally, before any of you complain that his name is Malone – I have renamed him Cat.  It’s easier to remember and is slightly more descriptive.

Anyhows, Cat wandered out the door closely followed by the dog.  As Cat walked, so Penny marched alongside like a shadow, making sure everything was all right.  Cat mooched around, exploring dust patches and bushes and strange stuff called grass [remember – this cat had never been outdoors before].  Eventually he wandered back into the house all pleased with himself.

Relationships between dog and cat seem to have settled into a steady pattern.  Penny treats Cat with utter disdain, though secretly is quite fond of him.  If Cat arches his back and hisses at Penny she either ignores it or walks past deliberately bumping Cat in the process.  If Cat tries something devious such as creeping up for a sneak attack, Penny throws a snap at him, whereupon Cat streaks off in a cloud of fur to the front of the house in a panic.  Penny is definitely Top Dog and intends to remain that way.

So I no longer have to sit with all doors and windows closed.  At last I can let some fresh air into the house to dispel the stink of cat piss [and shit – boy but cat shit doesn’t half stink!].  First thing today I threw the doors to the garden open, and both animals wandered out.  Shortly after, Cat came streaking back in in a panic – she had discovered yet another new phenomenon – rain!

So slowly but surely life is returning to the chaos and mayhem that I like to call normality. 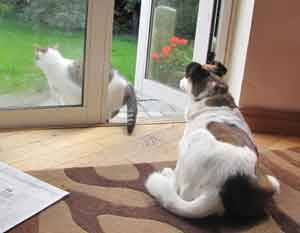