I had to go down to the village earlier and the place was packed with fucking foreigners.

Needless to say the place was in chaos.  The roads were jammed with people looking for parking, trying to park or just parking badly.  The place was at a standstill.

Walking wasn't much better as the pavements were also jammed with foreigners all standing around looking lost or taking photographs.  For some reason a lot of them seem to think that a photograph of the village isn't complete without an authentic bearded local so I have to spend my time dodging them.  Those I can't dodge, I give the two fingers just as they are pressing the shutter.  I have become quite good at timing that.

I don't know why there were all there.  There is nothing particularly special about the village.  It wasn't used for filming Ballykissangel or anything crass like that.  Strangely enough people have difficulty finding the place when they are looking for it, yet when a bank holiday arrives they land here in their droves.

I came home and took a photograph of my own.  There is no one beardy in it, nor is there any vestige of the village.  It's a Camelia I discovered flowering in an obscure corner of the estate, behind the South Wood.  It was so obscure I had to force my way through a thicket of brambles just to see the plant.

I think it was worth it though. 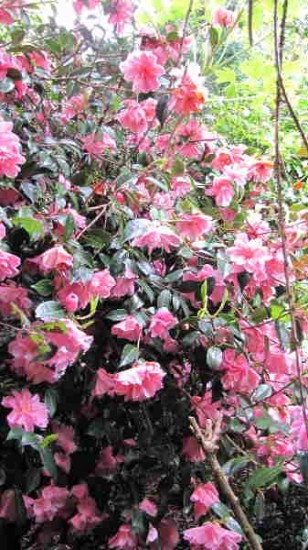