If I sit in my favourite chair and look straight ahead, I look out the window at a beech tree.

The tree seeded itself around forty years ago and is now quite an impressive tree.

Unfortunately, within the next year or so it is going to have to go as it’s taking a lot of light from the house.  A damned shame as I like beeches.

That tree has a strange branch which happens to be directly in front of me when I look straight ahead.  To the non-observant it is a perfectly normal branch like any of the other thousands of branches around the place.

But I know different.

It’s actually only the very end of the branch that’s special.  Further back towards the main trunk, it just becomes a normal branch again.

It’s in a time warp.

Every year in Spring, it’s the tip of that branch which is the first to show buds.  The rest of the garden remains in the chill grip of winter, but the tip of the branch refuses to acquiesce and starts sprouting buds.  Nice.  It always cheers me up.

The opposite happens in Autumn.  As I look out the window now all I can see around me is the verdant splendour of trees in their full Summer leaf.

Except of course for my branch. 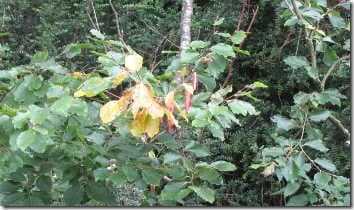 Once again, it is ahead of the pack and has been showing Autumn colouring for a week or so, while the rest of the tree remains a solid mass of green.

And the thought occurred to me that if I cut the branch in Summer, maybe Autumn would be also cut off, leaving me in permanent Summer.  But if I got my timing wrong I would be stuck in permanent Winter.

Or maybe I should move my chair to look out a different window?