Ireland is a country devoid of cavemen who don’t use expensive mobile internet devices, according to Minister for Communications Pat Rabbitte.  To Mr Rabbitte, cavemen are “people who don’t watch television and don’t access content on their iPad or their iPhone or whatever”.

Just who the fuck does this supercilious little cunt think he is?

I don’t own an iPad or an iPhone.  I have no intentions of buying either, so does that make me a caveman?  I do own a television which mostly just sits in the corner doing nothing.  The fact that I have a television is none of Rabbitte’s fucking business.  I bought the television with my money.  I pay for the satellite subscription with my money.  If I do watch a programme on it, that programme will come from outside this godforsaken country so that also is none of Rabbitte’s fucking business.  If I watch a film on BBC, just tell me where I owe this country any money?  Does Rabbitte hand that money to the BBC?  Does he hand it over to the satellite company?  Does he fuck – he uses it to swell the gubmint’s coffers to be squandered on bankers’ gambling debts and fancy trips abroad.

That “Broadcasting Charge” is nothing more than a supplement to the immoral home tax that they are trying to bring in.  If you own a home you owe a tax on that and you might as well pay the charge as well.

Next they’ll be bringing in a roof tax or a garden tax.  Maybe they’ll tax your trees whether you have them or not [if you don’t have a tree you must be a Luddite?]. 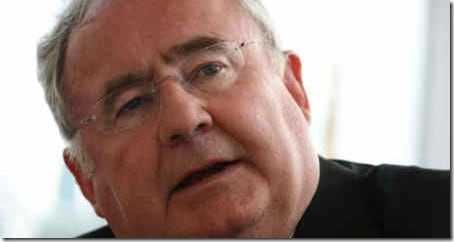 It is a face that would be greatly enhanced with a piano-wire necklace though.