Something very strange has happened in the garden.

The place was always pretty fertile, but this year it has become positively prolific.

We have a sundial which in the early years stood on a wide patch of grass between a yew tree and an apple tree.  That wide patch was progressively been getting narrower but suddenly this year the sundial has disappeared.  It has been completely surrounded and eaten by the yew tree.  The lawn is getting progressively smaller as the bushes encroach.  Opening the front gate has become difficult as suddenly there are trees in the way.  Madness.

After spending yesterday quietly sitting in the sun and pondering upon what I should be doing, today I decided to do some light pruning around the place, so I got out the chainsaw, the bolt cutters, the pruning saw and set to work.

I have removed three trees that I swear weren’t there last month.  I have removed a mountain of brambles from the one spot where I’m positive I cleared completely last summer.  I discovered that one of my variegated holly trees has been sprouting dozens of baby trees by drooping its branches and layering itself.  I didn’t even know hollies could do that?

I thought about mowing the grass, but my little light pruning has me fucked.  It’s hot outside [anything here over 10 degrees is considered hot] and it’s also quite humid so I’m sweating like a nervous candidate.

I think it is time to accept the inevitable.

By this time next year the entire estate is going to be one solid mass of hollies, brambles and ivy.

There is no point in fighting it so I may as well just sit back and watch the beech tree sprout new branches, and the ivy slither its tendrils across the ever diminishing lawn.

Anyone want a hundred or so variegated holly trees? 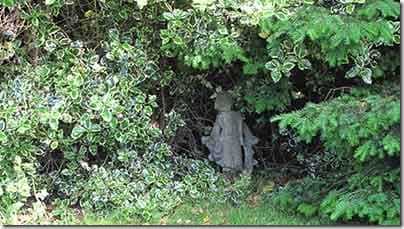 The Wee Lad where the holly meets the yew