I have known quite a few dogs in my time.

First there was Rory, a wire-haired terrier.  He went wild one day, tried to rip my sister’s throat out and had to be put to sleep.  [The dog, not my sister]

Then there was Pumps [blame my mother for that name].  Pumps was so non-descript that I really don’t remember anything about him.

He was followed by Aesop [my mother strikes again].  Aesop was a great dog.  He was a mostly-greyhound-mongrel, and was a complete idiot.  He was convinced that there were rats living in an air vent in front of the fire, and used to stand guard while the heat of the fire singed the back of his neck.  When the smoke got a bit thick and noxious we’d have to drag him away from the fire.

He also had a habit of grinning.  If he was really pleased about something he would bare all his teeth.  As a result he was a fantastic watch dog.  He considered everyone to be his friend and would grin at them.  They would run a mile.

Then came Tuppy [Blame Herself this time].  Tuppy was a small black pocket sized mongrel, and because she was pocket sized I used to stick her in my pocket if I was doing shopping or having a pint.  She was the quietest, most timid dog I have known, and would remain utterly quiet unless she saw a knacker.  For some reason I never discovered, she hated knackers.

And then came Sandy.

Of all the dogs, she is The Dog.  Anyone who has had a dog will know what I mean by The Dog.  You only have one of those in a lifetime.

Sandy is the gentlest, most loving, most intelligent and funniest dog I have known.  She arrived as a six week old puppy and has been with us now for thirteen years.  From the very start she had the self-imposed job of looking after me and Herself.  She has the run of the house, including all the chairs, couches and beds, but at night she insists on sleeping just outside the bedroom door, on guard duty.  At all times she has to know where both of us are and has to check regularly if we are not all together in the one room.

She is the only dog I have known where I can give her a nice juicy lamb bone and can take it off her again without the slightest protest.  Apart from cats, distant dogs and the odd stranger [usually tourists] the whole world his her friend.  She happily adopted our two guinea pigs and treated them like her own puppies.  She has adopted fledglings in the garden and will mind them if they are in trouble.  She once became very friendly with fledgling dove and the two of them used to bask in the sun together.

She is the only dog I have met that has a great sense of humour.  She has a series of tricks she likes to play and we are never quite sure what stunt she will pull next.  If she is displeased she will usually show her displeasure with one of her little tricks.  Probably the funniest one was where we left her for a few hours on her own. When we came back to the house, she had taken a full wrapped loaf of bread and had placed it, completely undamaged in the middle of the sitting room floor purely as a sign of her displeasure.  We got the point.

She is under sentence now.

The cancer the vet discovered is presumably taking her over.  The prognosis was around five months, and that was over six weeks ago.  She is being spoiled rotten now.  Outwardly she looks like a very healthy, happy dog but I know there is that blackness doing its hidden filthy work.

I am dreading the Summer. 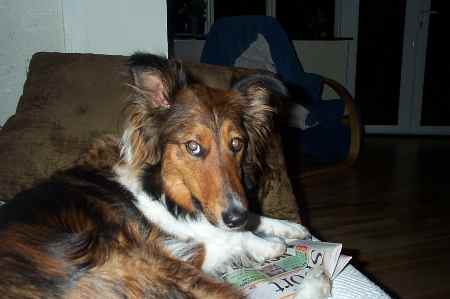