I phoned my Service Provider yesterday. Of course I got onto a bloke who could only speak Estonian. I explained that my downloads were perfect, but that I couldn’t upload anything. After a lot of “could you repeat that please” he sent me some instructions for some tests and told me to e-mail him back the results.

Of course the tests he sent me were to test my download. W*nk*r. I sent them back with a terse reminder that it was my upload I was worried about.

I rang back before lunch and got onto a very nice bloke. I’ll call him Tim [which isn’t his real name!]. This was something new to me. Tim sounded like he knew what he was talking about. He was friendly. He was helpful. He could talk the talk. But best of all – he was Irish. [I presume he still is?].

Tim was a bit baffled by my problem. He did mention that they hadn’t any reports of problems [which was favourite in my betting list, if you remember]. He didn’t mention trees or earthquakes or even sunspots.

He told me to try several things that all sounded sensible, like connecting my PC directly to the aerial. But none of them made any difference. In all we were on the phone for three-quarters of an hour. Then he said he’d have to go into a huddle with the Second Line of Defence. I knew I was getting somewhere. He said he’d ring be back at half one.

At half one, on the dot, he rang me. After I picked myself up off the floor, he explained that the technical lads were baffled and had to think some more, and that he was only ringing me because he said he would. He said he would ring back when he had something to report.

Half an hour later, he rang back. We did some fierce jiggery pokery to allow the Second Line run some tests. He said he was buggering off for an hour and would ring me back. I suppose everyone is entitled to a lunch break.

So, for an hour, I sat there watching strangers attack my PC [because I had to switch off a firewall or something]. I presume every f*cker in the Eastern Bloc now has my credit card numbers. Not to mention my medical records, bank account details and the size of my willy.

An hour later, Tim rang back. They were stumped. They had run their tests, and apparently I have a perfect connection. He even sent me a little graph thingy to prove it.

It looked like they spent the hour playing around with MS Paint, but I doubt it.

They had shown me theirs so I showed them mine. And mine was bigger than theirs. 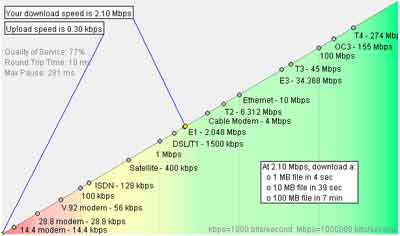 So the long and the short of it is that I won my bet [at Evens] that there is nothing wrong at their end. But I lost the war.

But I still can’t upload.