We have a new addition or two to the family.

George and Mildred have decided to build an annex on our house. In fact, they have built just outside our kitchen window.

It is a beautiful nest, and extremely well hidden, even though it is only a foot or two from the window pane. I tried to photograph it, but as I didn’t want to disturb anything, I had to shoot through the glass. And that causes reflections…

I have put a little arrow in showing the nest, but even then you can’t see it.

I tried a telephoto shoot of the nest, but that didn’t come out too well. And even then it’s hard to see. 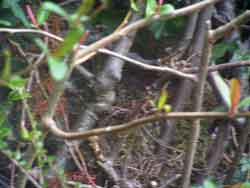 The nest is the lower half of the photo.

George took a long time to build that nest. He started off with twigs. Then came the moss. And finally, a nice layer of Sandy’s hairs which I left out nearby.

George and Mildred are blackbirds and are having a busy time of it. They are taking turns on the eggs at the moment. The switch-over happens every couple of hours. One will land in the branch just at the window and the other then flies off for a drop of lunch or whatever.

Then come evening time, George heads up to the top of the nearest tall tree and joins in with the other blackbirds and thrushes and they all roar their heads off. It’s quite a sound.

I just went to boil the kettle, and had a look at the nest.  As I watched, George arrived with a beak full of grubs, as Mildred flew away.  George did his bit and then he too flew away.  So the eggs have hatched.

Congratulations George and Mildred.  I haven’t seen your offspring yet, as I don’t want to disturb anything.

Which goes to prove – you can’t make a blackbird without breaking eggs.