Herself used to complain that I swear too much.

Then she started objecting to the use of “cunt” in particular.

Things have eased back somewhat and she is far more likely to scream at someone on the television and call them a cunt than I am.  In fact I am proud to say that her swearing abilities are far more eloquent and plentiful than mine.

Anyhows, this got me thinking yesterday.  I thought it might be a nice little project to count occurrences of various words in my posts over time.

In the early days, when I was far too restrained, I used to use f*ck, until I realised how hypocritical that was.  Everyone who sees “f*ck” knows exactly what it means yet somehow the use of an asterisk is supposed to make the word more acceptable? So I decided to be honest and drop the asterisk.

I hoped the project would be a little bit more complicated so I could challenge the old brain somewhat.  To my disgust it only took a few minutes.  So I modified it to produce a graph instead of just numbers. 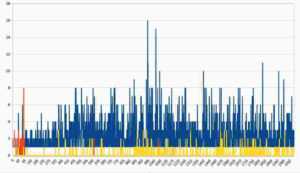 Now the tiny orange bit on the left is f*ck, and you can see how quickly I dropped it.

Yellow is the derided cunt.  Not quite overwhelming, is it?

And the blue is fuck and all it’s associated words such as fucking, fucks, fucker and the rest.

By my reckoning, I am taming down somewhat?  Maybe it’s old age or maybe a resignation that the world is so totally insane that there is no point in getting worked up over it.

Nothing to be ashamed of there?