I came across some startling news the other day.

I have been waiting for the front page headlines in the mainstream meeja but so far no mention which is a little surprising.  They are more concerned with tedious little items such as Brexit and the threat of nuclear war between America and North Korea.

The fact is that the world is going to end tomorrow.

Now I’m not quite sure how it’s going to end as the various camps seem to be divided between biblical references and the fact that the planet Nibiru is going to smash into our wee world.

I confess I am a little sceptical about the Nibiru thing, as surely something big enough to break our planet into little pieces would be reasonably prominent in the sky by now?  Unless of course it is still way beyond our solar system still and is going to cover the distance from Pluto to here in less than 24 hours?  That would certainly fuck up the theory that nothing can travel faster than light? 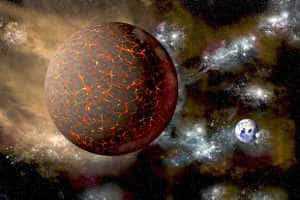 Planet Nibiru about to spoil our day

The other mob are taking the more biblical approach and predicting the date by playing around with numbers and astronomical signs.  I found one detailed explanation on YouTube called “Overwhelming Evidence for a September 21-23, 2017 Rapture” which I would suggest you watch if you have 19 minutes of your time you wish to utterly waste.  And with the world ending in 24 hours I’m sure you have better things to do?  Like paying off outstanding bills, or shagging the next door neighbour’s wife [or husband] [or both] who you have always secretly fancied?

To confuse things even more, the biblical mob make no mention of a planetary collision but instead talk about the Rapture.  And what’s more this Rapture has already started and we are in the middle of it right now.  I checked out the window earlier and frankly I can’t see anything different, though at least last night’s rain has passed.  There again I haven’t a fucking clue what a rapture is so maybe it’s there and I just can’t see it?

Now if you do a Google search for “end of the world September 23 2017” you will find an amazing number of returns [85 million and some?] so there must be something to it.

I had a few things planned for tomorrow.  I have put them off until Monday, just in case.

You can’t be too careful?

In the unlikely event that the world will still exist next week, there is a very interesting talk next Tuesday in Dublin –

Dublin: An Evening with Chris Snowdon.

I would love to go but will probably still be cleaning up after the mess of a planet landing in the garden.