I brought Penny to the vet the other day.

It was about time for her annual one mile service [she doesn’t like exercise so I had to lie about the distance she had covered in that time – it was nearer a hundred yards].

There is one feature of every visit to the vet – they always castigate me about her weight.  I keep explaining to them that Penny’s greatest form of exercise is yawning and occasionally circling before settling down to sleep again.  Even eating has become a waste of sleeping time and her latest trick is to bring a mouthful of dinner to bed so she can chew bits between naps.

Anyhows, I have been doing my best.  I don’t give her little treats any more and while we were waiting for our appointments she eyed up a bull mastiff but I told her to chew on a Chihuahua instead but she was too lazy to get up and went back to sleep again.

Her name was called, so I woke her and dragged her into the surgery.

The vet was a girl I hadn’t met before, and she had another girl who was apparently a French trainee.  I knew the latter was French because she hadn’t a word of English.

“They say she’s a Lurcher” says I, “but I think she only inherited her head from the Lurcher.  I think her daddy was a Newfoundland and she inherited its body.”  I like to get my arguments in early before they start whining about her weight.

She has apparently lost a couple of pounds since last year!  Wonders will never cease.  I don’t know how or where she lost them, but I can’t comment as I’m always losing my car keys.

The examination continued.  The French girl was encouraged to examine her eyes [just how eyes should be apparently] and listen to her heart [a perfect heartbeat to judge all other dogs by] and peer into her ears [clean as a whistle].  All in all a perfect bill of health.

She had her injections [Penny, not the vet] and her nails clipped and that was that.

I congratulated Penny on her weight loss as we drove home.  She wasn’t listening though.

She was fast asleep. 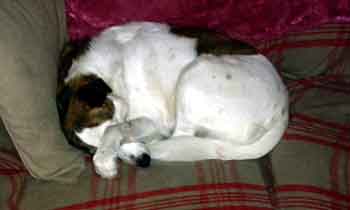