A week or so ago I mused about web sites and how horrible some were.

In passing I mentioned that I was messing around with this site on the sly [actually on my laptop but that’s beside the point] and some of you got a bit worried for some reason.

I was going to wait until Sunday to make any changes to the real site, but I woke early this morning and as usual there was no one reading the site so I thought I would have a bash at transferring all my hard work onto the server.  A lot of you probably won’t even notice the difference – a lot depends on what you are using to view it.

I have left most of the old design in place but have done a lot of tidying up, removing extra bits and bobs that were more a nuisance than functional [a bit like politicians].  The biggest difference is the one thing I hope you never see – the software that drives the site.  It’s supposed to be leaner and faster, but more important it is supposed to be future proof [for the next year or two anyway] so the site shouldn’t fall on its snot if someone trips over a loose wire.  One thing it should do [which the other one didn’t] is to fit all screens even if you have wired your iPad into a Multiplex screen.

My only problem now is that I may have left something out without noticing.  So if you see something that isn’t there, do let me know.

I’ll probably tweak it a bit more from time to time so don’t be surprised if it all blows up.

In the meantime, it’s the Grandaughter’s Second Birthday today.

I promised I would buy her her first pint of Guinness this afternoon. 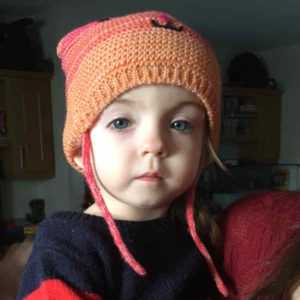 Her Imperial Majesty the Princess Squidge of Wicklow
looking benevolently upon her subjects.