I used to write a lot about Sandy.

For those of you who haven't been around that long, Sandy was my dog – a Rough Collie.  She was an extremely intelligent and gentle animal and I was gutted when she died back in '12. 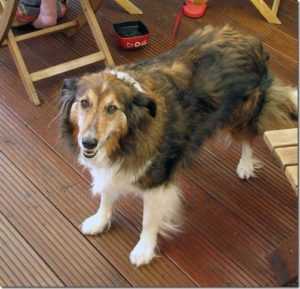 For some reason that is completely beyond me, I rarely if ever mention her successor Penny.

It is amazing how two dogs can be so similar yet so different.

Sandy was a barker.  She used to drive me demented because every time I went into the garden she would dance around me [just out of reach] barking incessantly.  This was her game, and she was going to play it, whether I liked it or not.

Penny on the other hand never barks except at strangers in the lane.  In fact she rarely makes any noises at all.  she is the quietest dog imaginable, except when she snores.  Which she does.  Occasionally. 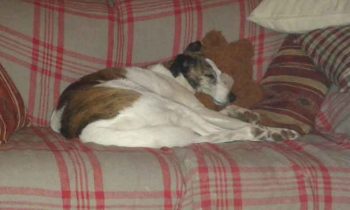 The only other thing that used to annoy me about Sandy was that she was a wanderer.  The slightest excuse and she'd be off over the hills and I would then have to try to find her.  She was forever making holes in the fencing and I was forever scrambling through brambles and nettles trying to find those holes.

Penny couldn't give a shite about the outside world and rarely wanders out the gate if she finds it open.  She would much prefer to stay at home and sleep. 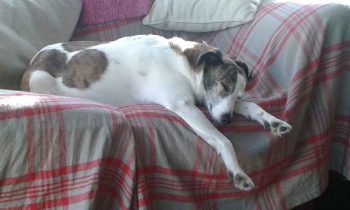 Sandy loved the car.  She used to sight proudly beside me in the passenger seat and keep a wary eye on other drivers, and if she saw a bad maneuver she'd look at me and give me that knowing look – "fucking idiot!" – and I would quietly nod in agreement.  If I left the car, she'd plonk herself behind the wheel so she looked like she was waiting to collect someone, much to the amusement of passers by. 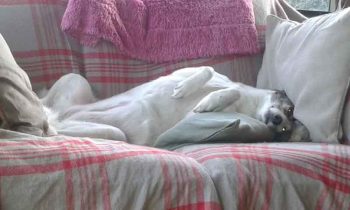 Penny is actually quite an active dog.  When the mood takes her, she'll lash off around the estate at a speed that is quite amazing.  She crashes through the woods at full pelt and never trips up.  When she gets onto the grass, nothing will catch her.  Until that is until she runs out of steam and it's time for a sleep. 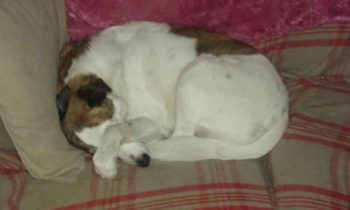 I'm not sure what breed Penny is.  According to Doc she's a cross between a Lurcher and a Collie but I don't believe that.  Her head is too small for her body which makes her look a bit overweight [which she is anyway] but I swear she got a small head from one parent and a large body from the other.  That's my excuse when I get berated for letting her get fat.  Actually it's probably just from lack of exercise.  Did I mention that she sleeps a lot? 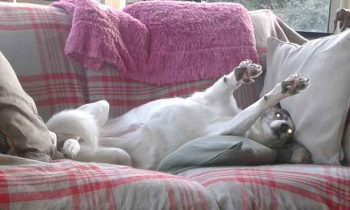 For some unknown reason she has the ability to make someone fall in love with her at fifty paces.  It's impossible to walk around the village without someone stopping to pet her and say how beautiful she is.  I'd say she's getting a swelled head, but she isn't – otherwise it would match her swelled body and she would look more balanced.  Of course all that walking and attention just means she has to sleep more. 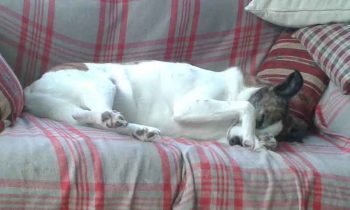 I love her to bits though.  The only things she demands out of life are a full dinner dish [with room to lie down while she eats], a frequent dose of tummy tickles and the odd fly to chase.  And of course her own place to sleep. 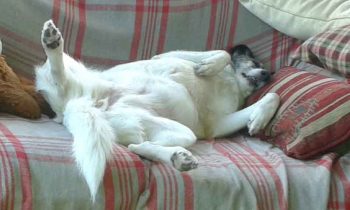 To sum her up, I'd say she has the head of a Jack Russell crossed with a Lurcher,  a body that is somewhere in the general area of a Collie, a coat of a Mink [incredibly soft and silky],

and the constitution of Rip van Winkle.