Their plans for minimum pricing have taken a bit of a hammering.  The EU in all its vast wisdom has decided this is unfair trading or something.  However there is a strong hint that if the gubmint want to increase taxes on booze then it's fine by them.

So expect a massive hike in tax on alcohol in the near future.

The EU in all its vast wisdom has decided that "plain packaging" for tobacco is OK.  Needless to say the Puritans in Tobacco Control are wetting themselves in delight and crowing about all the lives that are going to be saved.  They reckon that 5,200 people die every year from "tobacco related diseases" so doubtless 7,000 of those [at the very least] are going to be "saved".

Mind you, the EU has only said that its own directive is OK, which involves splashing lurid images over two thirds of the package whereas Tobacco Control want the whole lot covered so they may be a tad premature in their celebrations yet.

“The European Courts have given a massive Christmas gift to the Irish people. It’s time now to press ahead and ensure that 2016 marks a significant moment in the tobacco endgame.”

Oh yes.  The title says "The Good the Bad and the Ugly" but I haven't mentioned the ugly bit yet? 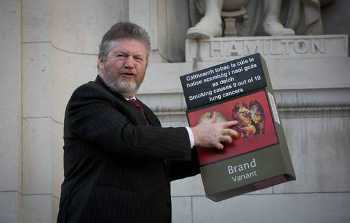