Well, the storm has passed.

The damage here is quite horrendous.

There is a telephone wire [not mine] lying on the lane as it had snapped in the breeze.

I did my tour of the estate and found a huge branch that had come off a tree.  It must have been all of two feet long and a quarter of an inch thick.  If it had fallen on someone it might have given them a nasty scratch?

The weirdest damage though was to the new terrace.

The terrace itself was unharmed but it was covered in pebbles. 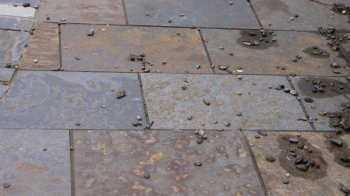 Where did they come from I thunk to myself?

Could the sea level have risen overnight by about six hundred feet and deposited them there?  I thought that would be unlikely as surely it would have been in the news that Skobieville had vanished?  Then I realised that was no indicator as I doubt anyone would give a shit [apart from the residents].  But then I looked out to the horizon and there was the sea in its rightful place in the far distance.  And anyway there was no seaweed.

So where the fuck did the pebbles come from?

Then it dawned on me.

They had probably blown off the roof.

It's a large flat roof and is covered with pebbles, weeds and some old junk.  [Tip of the day – flat roofs are a great place to store all those old scraps of metal and the like that are too big for the bin.]  Anyhows there is a considerable quantity of pebbles for some reason I have never fathomed.  Are they there to keep the sun off the felt?  Are they there to weigh the roof down?  Are they just handy ammunition in the event of a siege by hostile neighbours?

So now I have to sweep them up off the terrace or the grandkids will doubtless throw them onto the lawn to fuck up the lawnmower.

I wonder if the army is available to lend a hand?