Now this is strange because I was always lead to believe the workplace ban was there for the sake of bar staff and other employees?  Are they finally admitting that its sole purpose was to marginalise, demonise and denormalise smokers?

That aside, there is nothing surprising in the report.

Basically the workplace ban affected two groups of smokers.  The first group is the person who is employed in a workplace environment – office staff, bar workers, shopkeepers and so on.  The second group are those who only enter a workplace by choice – the self employed, workers in an outside environment [builders, farmers and the like] and the unemployed.

The first group are the ones who were hardest hit as they suddenly found themselves forced to completely abstain apart from smoking breaks.  This is the group one would expect to have the highest quit rate.

The second group were only really affected if they had to enter a place of employment such as shops, hotels and of course pubs.

Within the timeframe of the study there have been several massive price hikes levied on tobacco, so I would expect a decrease in overall rates.  One would expect though that the first group would be the greatest quitters as they have to suffer the price hike plus the workplace ban, whereas the second group only gave to bear the price hikes?  Yet the study shows the reverse is true?

My theory is quite simple – it's the Stubbornness Effect kicking in.

People don't like to be ordered around.  They don't like laws, rules and regulations.  The more you order them to do something [particularly something illogical] they more they will resist and refuse to comply.  Smokers see themselves as being ordered to quit so naturally they respond with the two fingers.  Our first group, while having to endure the workplace ban are financially better able to weather the price hikes and are therefore better able to continue to resist.  Our second group however are more likely to have suffered financially from the downturn and in many cases have joined the unemployed and have therefore been forced to quit.

From the turn of the Millennium Ireland has been subjected to a whole raft of Draconian legislations.  We have suffered from the workplace ban, massive price hikes, a ban on sales of 10 cigarettes [I still can’t find the logic in that], a ban on all advertising and sponsorship, a ban on vending machines and a ban on even the sight of cigarettes in shops, yet the smoking cessation rate remains at one of the lowest in the world.  With the possible exception of the price hikes not one measure has had the slightest effect on smoking rates in Ireland.   The more they demand, the more the smoker resists.

By the very nature of the bans, they have succeeded in creating a subculture whose membership consists of exiled smokers.  Walk up to any group outside an office or pub and if you have a cigarette [or pipe] in your hand you are instantly welcomed.  There are many anecdotal reports of non-smokers actually taking up the odd puff just to join in the camaraderie of the subculture, which proves that in some cases the laws have actually become counterproductive.

If they really wanted to cut the smoking rate here in Ireland they would stand a much better chance by simply reversing all that petty legislation. 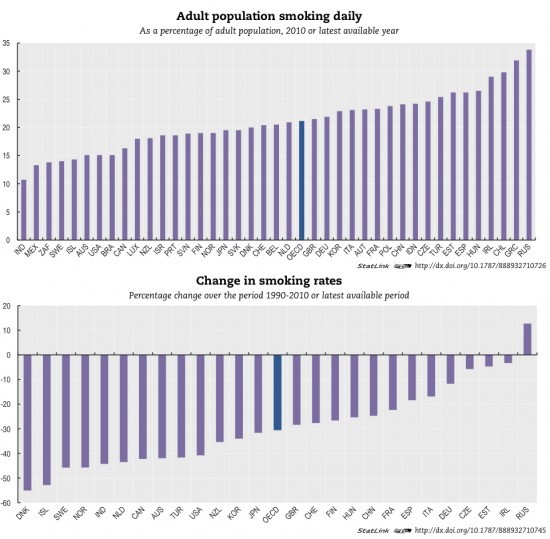