2014 the hottest year on record, say US government scientists

The headline says it all – the hottest year on record.

Imagine if you will a young man who has never seen the sea before.  He has a fascination with measurements and graphs but knows nothing about geography, astronomy or geophysics.

On his first encounter with the sea, he is fascinated with the waves and starts measuring them.  To his surprise the graph first shows a slight decline but then starts to rise, and alarmingly seems to indicate that the water levels are rising at such a rate that in a matter of months or even weeks the entire land is going to be inundated.  He rushes back to his village with his alarming news and the village elders declare that the cause is down to the villagers throwing their rubbish into the sea. 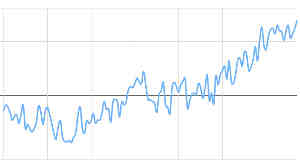 Of course we know that if our young man waited a bit longer he would have discovered the phenomenon of tides.  Just another couple of hours and the levels would have receded again.  We know that the tides are caused by the gravitational pull between the Earth and Moon and that dumping rubbish in the sea would cause nothing more than a theoretical rise in sea levels that is too small to ever measure.