I hate that expression “green shoots”.

I hate it because it is one of those horrible little expressions that seems to become the mot du jour, and it has been thrown at us incessantly here in Ireland for the last four or so years whenever someone is talking about the economy.  Just Google “irish economy green shoots” and you’ll see what I mean.

“Green shoots” is also a perfect expression of the complete disconnect between our gubmint and reality.  For four or so years they have been wiffling on about “green shoots” while the people of Ireland continue to watch their sons and daughters emigrate in search of a job; people continue to be evicted from their homes and families struggle to put food on the table.

The gubmint seems to be under the impression that by uttering those two magic words that we will all emerge from our bunkers and start spending like there is no tomorrow.  They imagine that the financial market will suddenly gasp in amazement and immediately give us an AAA credit rating.  They think that we will actually believe them and forgive them for all the financial hardship which we have had to endure, and indeed are still enduring.

We have had an interesting few days here.

There were two by-elections where the main parties were ousted by independents campaigning almost solely on the water charges, and then there was the march on Saturday which attracted tens of thousands onto the streets. 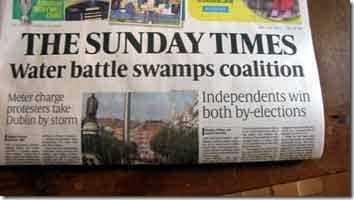 Of course the shysters in power are wringing their hands and blaming their losses on everything but the fact that people don’t trust them any more.  Today I hear that there is going to be a proposal in tomorrow’s budget to give tax relief on the water charges [sheer coincidence, of course].

People are beginning to stand up to them.

Could we be seeing the first green shoots of a long overdue awakening of the Irish people?