I am confused, and that is putting it mildly.

The powers that be in Pamplona are only too delighted to welcome tourists by the container load.  They are happy to pack said tourists into very narrow streets.

They are then quite at ease with the idea of releasing a herd of enraged bulls into said streets to rampage amongst the said tourists.

They are delighted when a crowd of idiots try to outrun those bulls as they charge down the narrow streets that are packed with tourists.

So why the fuck are they so worried about a bloke using a camera as he runs within an inch of being gored?

It's dangerous, they say.

So is running within inches of the horns that are attached to a rather angry bull, I say.

We want to crack down on dangerous behaviour, they say.

And packing narrow streets with people and then letting loose a herd of angry bulls isn't, I ask?

He was putting the other runners in danger, they cry.

I say that an angry bull within inches of their arses was a slightly greater danger, I reply.

In its own little way, this item is a perfect example of the twisted world we live in.

They worry about a little wisp of smoke from a smouldering tobacco leaf, yet they are happy for us to walk the streets breathing highly carcinogenic traffic fumes.

They worry about people being a little overweight, while at the same time they pour chemicals into our drinking water.

They claim we use a little too much sugar while they prescribe us pills that fuck up our bodies with all sorts of nasty chemicals.

They nag and bully us over the trivial items while ignoring the real dangers.

Just as a footnote, I would fine the bloke €3,000 but only because he is a brain dead narcissistic twat, and I don't care whether the bulls are behind him or not.  I fucking hate this modern obsession with "selfies".  Yet another product of the mindless Twitter generation.

And I really hate that word "selfie"! 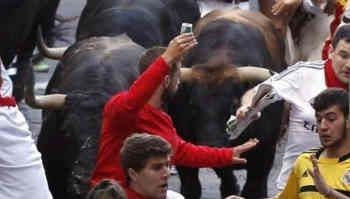