You really couldn't make it up.

Big Pharma is worried because their leading supply of ingredient is insufficient to meet demands.  The world is running short of painkillers as a result.

And what is this ingredient that is in such short supply?

Big Pharma was warned [not asked, I note] Australia that they have to devote more land for the growing of the infamous poppy, as demand is rapidly increasing while the supply isn't.  We truly live in a world of pain?

The beautiful irony is of course that on the other side of the world, the Merkans are doing their damnedest to stop the Afghans growing said poppies.  It's all part of their "war on drugs" apparently.

So on the one hand we have the Australians who can't grow enough of the stuff because they are scared to licence extra farms, while on the other hand we have the Afghans who are increasing their yield despite the best efforts of the Merkans.

So we have a dearth in one area and a surplus in another.  Can anyone see the glimmer of a solution here?  Is there anyone able to join the dots?

But then logic doesn't seem to have a place in this modern world? 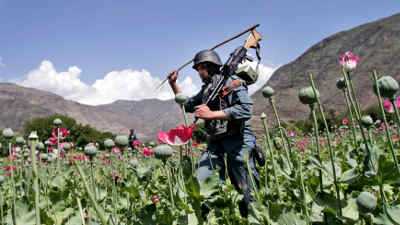 [H/T to Ian for that little nugget]