A few months ago I received a phone call from a journalist.

She said she was doing a piece on smokers, and could we chat?

Well, chat we did for quite a long time, and a pleasant chat it was.

I forgot all about it after that.  After all, I had important things to occupy my mind such as going on holidays and getting pissed.  Interviews for a newspaper were way down on my list of priorities.

A few days after we came back from holidays, I got another call.  A photographer wanted to get a few shots for the article that I had completely forgotten about.  I had given the Other Fella’s name and address which caused some confusion as he was all set to head to the wrong end of the county.  Heh! Eventually he came and took dozens of shots.  I had to produce vast quantities of smoke for each shot so I got quite lightheaded.  What was worse, he demanded vast quantities of smoke and a smile at the same time.  It was around that moment I discovered that smiling while sucking on a pipe is a physical impossibility.  I learn something new every day.

After he left, of course I forgot about the whole escapade again.  After all, that was weeks ago and I assumed the whole thing had ben dropped.

I got a text message thingy from the journalist this morning – the article is in the Irish Independent.

I bought the paper and there it is – a lovely photograph of Penny.  She is so proud.

Considering we chatted for the best part of an hour, the journalist – Geraldine Lynagh – she left a whole lot out.

Unfortunately she left out the bit where I explained precisely why our Minister for Sickness and Ill Health was an unmitigated cunt.

Unfortunately she left out the bit where I said that the gubmint could stick their anti-smoker laws up their collective holes.

Unfortunately she left out the bit where I said that anti-smokers were a shower of brainwashed fuckwits.

I suppose you can’t win ‘em all?

The article isn’t on line until tomorrow apparently, so for those of you who just can’t wait … 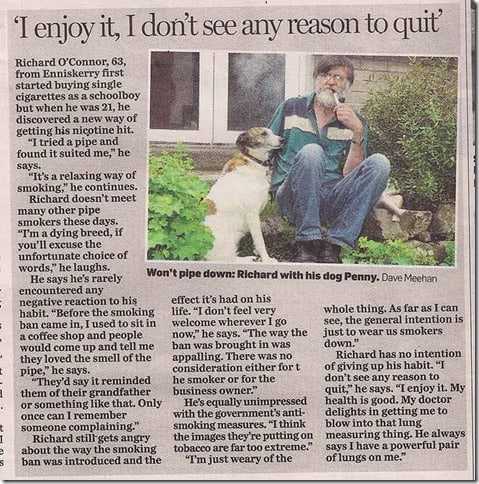 I may have given the Other Fella’s name and address, but Penny is real.