I have a bit of a thing about trains.

I suppose it comes about from having a father who was a railway engineer and also from numerous trips on the old Irish Mail from Holyhead to Euston in the days when steam was the thing and trains had real beauty and character.

I watched a documentary the other night that I had recorded off the BBC a couple of weeks ago.

It was a documentary on the history of the London Underground which is celebrating 150 years in business.

At one point, I laughed.

Oh, how I laughed!

I often wondered about the Underground before the introduction of electric locomotion, and sure enough, they used to use steam locomotives.  Now those of you who are familiar with steam locomotives will know that they produce one hell of a lot of smoke and steam – one of the joys of being on a steam train is watching the smoke and steam curl away across the fields, but underground?  That must have been a completely different kettle of elephants.

As part of the Underground celebrations they actually ran a steam train trough the Tube and this of course was on the documentary. 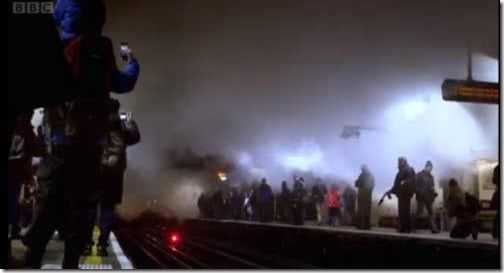 The station just after departure.

Now that picture shows a station after just one train.  How did they cope when trains were passing through on a regular basis?  How did people even breathe in that atmosphere?

And this is where I laughed.

I’ll pass you over to the commentary –

It just goes to prove you can tell the sheeple anything you like, and they’ll believe every word of it.

[If you want to see a steam train run on the Underground the full programme is here.  The steam run starts at around 16:00.  Very impressive!]