I see our Illustrious Leader has made the cover of Time.

He is being celebrated for “The Celtic Comeback”.

This gobshite has the neck to travel the world telling people that “the rest of Europe can learn from him”?

The interviewer states that Kenny is “somebody who has a gulf between the way he’s perceived in his home country and the way he is perceived abroad”.  Well, she got that right.  And the reason?  Because he is a two faced shit.  He goes abroad and tells people how wonderfully we are coping with our five years of recession, whereas the truth is that we are still more or less in the same situation as we were years ago.  Nothing has improved.  The unemployment is much the same.  Most of our graduates are emigrating.  We are being taxed at every turn with yet more taxes coming down the line.  Businesses are still closing at a rate of knots.  Where is the fucking “comeback” I would ask?

That little hypocrite came to power on a raft of promises, and so far he has managed to renege on just about every one of them.    He was supposed to put the people first, and instead has put Brussels first.  We are still pouring billions into the European banks.  And where do we get those billions?  From the European banks, of course and at a nice little rate of interest too.

Kenny has only one interest at heart and that is to lick Euro-arses at every turn.  He takes his orders from them and we suffer the consequences.  It’s no fucking wonder that Brussels loves him, just as every bully loves the little weasel who meekly hands over his pocket money every week. 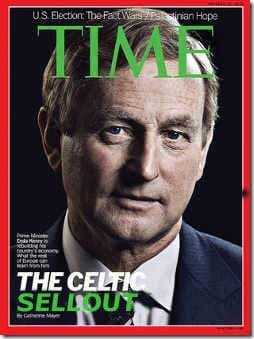