All through our lives we make decisions.

Some of those decisions are easy and some are hard.  Some are joyful while others are sad.

On Tuesday I made what is easily the most difficult and most painful decision of my life.

I have written many times about Sandy.  I have written about various escapades and scrapes that we have been through together.  I am probably going to repeat myself many times over, but I make no apology.

Sandy first entered our lives in May of 1999.  She was a six week old puppy and I didn’t want her.  We had a Jack Russell at the time and one was enough.  However, my dear daughter K8 dumped her into my arms, whereupon the puppy looked me in the eyes and I was hooked.

From that moment on, we were pretty much inseparable.  The little puppy grew and grew into a very handsome long-haired collie.  She was bright, very intelligent, affectionate and very funny.  Sandy taught me that dogs indeed do have a sense of humour.

In the beginning, the Jack Russell used to boss and bully her around.  Sandy took it all in her stride and never complained.  As the year passed I realised why Sandy was so meek in the face of the bullying – she was learning and biding her time.  She quickly grew and as soon as she was big enough, she started playing back precisely the bully tricks of the Jack Russell.  She was always gentle about it though – it was more of a reminder of the torment she had been put through.  The Jack Russell was not amused.

Sandy had two great loves in life – tennis and the car.

Most summer evenings she would trot over to where the tennis racket was kept and give it a nudge with her nose.  Having taken the hint, I would bring her out and bash balls around the garden.  She was an amazing catcher.  Somehow she could jump in the air and catch a ball that was flying across her path, no matter how hard I had hit the ball or whatever the angle.  She rarely missed.  In later years, she got bored of nudging the tennis racket and developed a new signal – we had a tall twiggy plant growing in a pot on the floor, and Sandy would go and nudge that as a sign she wanted a game.  I never worked out the reasoning or the logic there.

The car was a different story.

She took to the car like a fish to water.  Her favourite spot was sitting in the passenger seat, where she would sit solemnly staring out the front windscreen.  Bends in the road didn’t bother her – she would just lean into them as if she were on a motorcycle.  She never ever did anything that would disturb my concentration.  The only time she would acknowledge my presence would be when we were stopped at traffic lights and occasionally then she would gently place a paw on my left hand as if to reassure me.  As soon as the lights changed, she would remove the paw again.

Usually when we reached our destination, I would leave her in the car.  She didn’t mind this in the least and would immediately plonk herself into the driver’s seat and would sit proudly at the wheel as if she were waiting to pick up a passenger.  Quite often she would gather a small crowd of laughing admirers, but would ignore them until I came back.

On a few occasions we had to go out and leave her at home.  This was not allowed.  On our return, we would be greeted with some sign of her displeasure.  She might have upended the wastepaper basket or torn up a page of a newspaper.  Once we came back to a wrapped loaf of bread plonked in the middle of the sitting room floor.  It’s wrapping was unbroken and I never worked out how she did that.  Usually she wouldn’t speak to us for the rest of the day either.  The lesson was simple – thou shalt not leave Sandy at home.

Another little story I remember from Sandy’s very early years was a wee spat she had with Zoe, the Jack Russell.  Zoe was a thieving little whore and would whip stuff off the kitchen table without batting an eyelid.  Sandy was quite capable of robbing stuff but in her entire life the only thing she ever robbed were bread-crusts if one of us left a half eaten sandwich around.  She would show interest in meals placed where she could reach them, but never, ever stole anything.  Anyhows, this one time we had been out somewhere and came back to find Sandy stretched out on the couch while Zoe danced frantic circles around her.  I investigated and discovered that Sandy was guarding a wrapped parcel of sirloin steak.  Obviously Zoe had robbed it, and Sandy had taken it off her and was minding it for us until we returned.  Like the loaf of bread, the meat wrapping was unbroken.  Again, I don’t know how she did that.

Sandy was incredibly gentle.  Her two hates in life were cats and the heron, both of which would drive her into a frenzy.  Anything else though was there to be mothered.

She adopted two guinea-pigs we had for a while, and used to herd them into a corner to wash them.  If she found a fledgeling in the garden that had stunned itself by flying into our windows, she would mind it until it was capable of flying away.  She adopted a pair of hedgehogs and if she found them in the dark, she would rush back to fetch me to admire them.  One year, a pair of doves nested just above one of Sandy’s favourite spots in the garden.  One chick hatched and it became firm friends with Sandy.  Sandy would lie there in the sun with the fledgeling sitting on a branch just over her head.

Last February I brought her to the vet for her annual boosters.

While we were there the vet gave her a good check and discovered a lump in one of her teats.  I booked her in on the spot to have the lump removed.

The following morning the vet rang to say that they had x-rayed her, and could I call over.  They showed me the x-ray and there were a couple of distinct shadows in her chest cavity.  The tumour was malignant and had spread.  I was told that an operation would be pointless and would just cause extra pain.  They estimated five months.

The last five months I confess have been hell.  Sandy showed no real sign of any problems and was as happy as ever, particularly as we started spoiling her something rotten.  As the months went by, I began to have an irrational hope that the x-rays and the vets were wrong, even though three vets had examined the x-rays.  She seemed as happy as ever, with bright intelligent eyes and a cold wet black nose.

The five months expired last Saturday.  Sandy was as fine as ever.  The only thing wrong was that the tumour had grown enormous and the ugly thing hung down like a cow’s udder.  I will never be able to look at a cow again!

On Sunday, as if by some evil cue, Sandy changed.  She could no longer sit upright as the tumour was in the way.  She couldn’t stretch out on the window ledge for the same reason.  Sandy loved that ledge.  It was her favourite spot.  She started showing signs of distress.

Monday morning she was as bright as ever and we hoped the previous day was just a temporary aberration.  But as the day passed she deteriorated.  She was obviously in distress.  We comforted her as best we could.

I didn’t sleep for long on Monday night.

On Tuesday morning, I came down hoping things had improved.  They hadn’t.  She was just lying on the kitchen floor looking distressed, and wouldn’t even look at food.

It was then, at that moment I made the single hardest, most painful decision of my life.

On Tuesday evening at five, Sandy went gently to sleep in my arms.

The biggest hearted dog in the world had broken my heart. 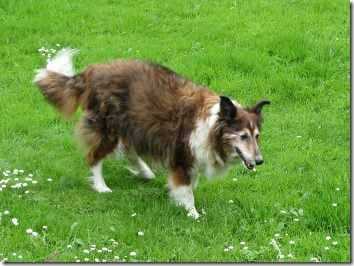