I see that nominations are open for the Irish Blog Awards 2012.

The awards themselves aren’t until next October so they are allowing quite a run up.  They also seem to have added a rake of new categories.  Thirty, for fuck’s sake!  I doubt there are that many sites left running these days.

Anyhows, as far as I am aware the rules are much the same as always.  Anyone worldwide can nominate a site for any category, but the site itself must be Irish [or written by an Irish person].

Don’t ask me about the finer details of the rules and regulations though.  They do have a page that sort of explains it all.

The nomination form is here.

Naturally I won’t use that image as I’m too modest.

I dunno if I’ll be going to the awards myself.  A lot can happen in four months.

I thought I would include a photograph of myself though, so if I do make it to the ceremony, you might want to know what I look like. 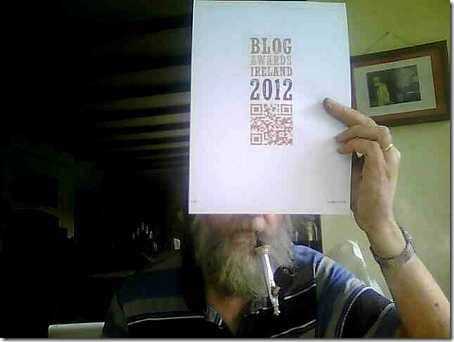 I notice I accidentally included a picture on the wall.  It’s the wee portrait which appears on the top of this site.