We used to have a regular visitor here at The Manor.

A heron used to come and rob all the fish in the lake.  Cheeky bastard.

I christened him Bertie Aheron as there was a certain similarity in the beady eyes and the sneaky approach to life.

I was up at the crack of dawn this morning [it may even have been as early as ten thirty] and the first thing I saw out the window was Bertie [Aheron, not the other little shit].  He was standing there in the middle of the grass looking somewhat frustrated.  And well he might, as I got tired of restocking the lake ages ago, so the only thing he’ll find in it now are some snails and an old supermarket trolley.  A lake isn’t a proper lake without a supermarket trolley.

I presume he was a descendent of the original Bertie, as I believe they have a lifespan of only five years.

I managed to shoot him.

Unfortunately I didn’t have the rifle to hand [why can you never find a rifle when you most need it?] so I shot him with a camera instead. 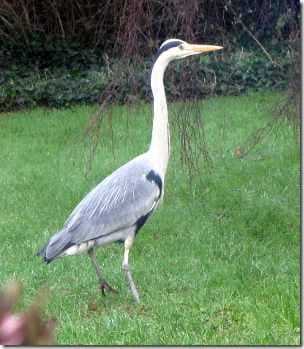 That is a magnificent specimen of Ardea cinerea?

What the camera failed to capture was another magnificent specimen – Canis Sandii – who was at that moment travelling in the direction of the heron at about 150 miles per hour.

It was the fastest fucking take-off I have ever seen.

Anyone want some heron feathers?