The more I see of Brian Cowen, the more I worry.

I think he has finally realised that he hasn’t a hope in hell of pulling us out of the mess that he and his cronies created and is relying on a new style of government – if you say something often enough, it will come true.

Technically of course, Ireland is coming out of the recession, in that we are now experiencing inflation rather than deflation, but unemployment still continues to rise, and in my book that means we are still on the way down.

If the government are behind him, then I would say they are in the right place, as it’s the only place to be to stab someone in the back. The sooner they do it, the better.

As far as I can make out, since this mess started two years ago, the government hasn’t managed to do a single thing right. All they have succeeded in doing is to blow billions that we don’t have and will never see again.

I have heard people say that Cowen is like rabbit fixed in the glare of oncoming headlights. I don’t think that’s true. I think it is the people of Ireland who are staring on in disbelieving horror at the mess Cowen is still creating.

Will someone please shoot the fucker and put him out of his misery?

Then maybe we can get back to sorting out the mess. 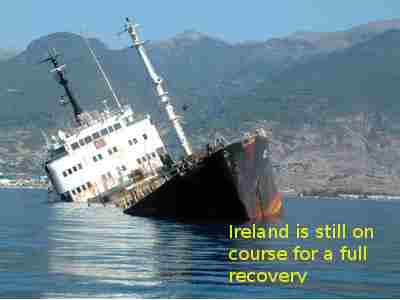 Cowen at the helm