While I was at the wedding on Saturday, I got a text message.

It was from the NCT, to remind me that my car was to be tested first thing today, Monday.  And when I say ‘first thing’, I mean first thing.  The bastards wanted me to be there before half eight, for fuck’s sake!

I had forgotten all about it.  Normally, I would get Spanner to give it the once over but he was busy yesterday recovering from a hangover so I decided I would have to wing it.

I left the house this morning, and while I was driving up towards Dublin, I began to have second thoughts.  I hadn’t even opened the bonnet of the car or checked the oil in about eighteen months, and these tests are fucking expensive.  So I stopped off and ‘borrowed’ a new car from the forecourt of a garage that looked exactly like mine and switched the number plates.

I rolled into the car test centre full of confidence and handed it over.

I got myself a coffee from a vending machine.  I ordered a white coffee with sugar and got a black unsweetened paper cup full of something that tasted like used sump oil, which it probably was.  Fail.

Eventually they drove the car out and gave me the result.  Fail.

Apparently they were worried about the radio being tuned to the wrong station and the back seat was the wrong colour, or something.  So I thanked them very much and told them I would fix it.

They checked it again.  Fail.

I asked them what was wrong this time, and they said I hadn’t removed the hubcaps.  I suggested very calmly and politely that they could remove them, but they said they didn’t have the right tools.  So while the bloke was standing there, I prised the hubcaps off with my car keys.  I think he was a little embarrassed by that, because he gave me the pass certificate on the spot.

To cut a long story short, the car is parked out the front of the house now.  It has a little scrap of paper in the windscreen saying it is grand until 2011.

That little scrap of paper cost me a lie-in and €50. 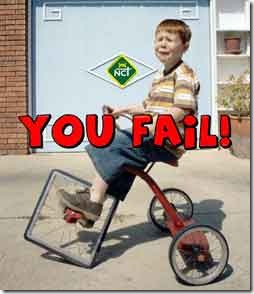