I watched the BBC news the other night.

The majority of the programme was devoted to this Swine Flu thing.

We were shown lots of film of laboratories and test tubes and people wearing masks.  We were treated to an interview with a bloke who has suspected flue, while he hung out of his bedroom window.  We were even brought to the grave of ‘the first person to die’ from the flu.

What in the name of all that’s holy is this about?

For fuck’s sake, it’s a dose of the sniffles.  The way they are going on about it, you would swear that Ebola was rampant and about to wipe out half the population of the world.

There is a strange phenomenon these days where the media and spin people fall madly in love with words.  We have been through “economic downturn” and “toxic debt”.  Now we are into “pandemic” [Jayzus, but how they love that word] and “alert level”.  They are wetting themselves in the meeja now because the “alert level” has been raised and a “pandemic is imminent”.

Let’s look at some facts here.

This is a normal outbreak of influenza.  Nothing more, nothing less.  The only difference seems to be that it is a little more contagious than normal.  So what?  So more of us are going to be coughing and sneezing than usual?

The big fear seems to be the mortality rate.  What mortality rate?  Outside Mexico, one child has died.  One child?  This is a threat to humanity?  Get a fucking grip!

Would it surprise you to learn that in the United States, over 14,000 people die from influenza each year and over 40,000 from related complications?  Now this is happening every year, but we never hear anything about it so why is this “swine flu” any different?

We are being bombarded with pictures of people wearing face masks and notices warning people not to travel.

Me?  I’m stocking up on whiskey.  You can’t beat getting hammered for forgetting your sniffles.

One good thing that has come out of it though.

Miss Piggy has crawled out from under her rock and has fucked off to Switzerland for a conference. 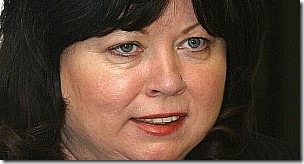 Maybe in her absence we should ban all travel to or from Ireland to stop her getting back in?

Now, that would be healthy.