A press release went out this morning.

I didn’t release it so I had no say in its wording.

It’s these damned agents of mine.  You know how it is when your PR people start losing the run of themselves and issuing press statements, and the first you know about it is when you read about yourself in the paper?

You can read the release yourself as it will undoubtedly appear in the International Press.

I know of one who was already dumping in her nappy at the time I was born, but she’s Up North, and we all know that isn’t really Ireland.  They don’t even use real money Up There.

If I am the oldest, it is a rather strange feeling.  The Granddaddy of the Irish Blogging scene?  Weird.

Of course, I have said before that I am only in my thirties.  Sometimes I’m in my twenties.  It depends on my mood.  Sometimes, when the grandchildren are in a stroppy mood, and I’m giving out hell to them, I am in my eighties.

To be honest, I am not even sure what age I am.  I gave up counting decades ago as it didn’t seem to be very important.

It is becoming important now, as I have to be able to claim my Saga Holidays, and free passport.  I have to be able to queue in Atlantic Homecare on Seniors day for my discount.  Soon enough I’ll be in for free bus tickets and free television licence [as if I ever paid it in the first place!].

Am I the oldest?

Is there some eighty year old out there frantically typing away that no one knows about?

Does your great-grandfather still blog?

Our Sandy does the odd bit of writing, though she hasn’t written in ages, but of you multiply her doggy years by seven, then she is older than me.

I wish my staff wouldn’t do this to me. 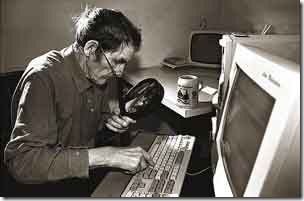