I am utterly sick of our government.

They are the most incompetent corrupt shower of bastards this side of North Korea.

They have managed to screw this country and just about every decision they make manages to make things worse.

I cannot think of one move they have made over the last years where I have sat back and said “Yes.  That makes sense”.

The problem is that there is no alternative.  The others seem to be either as incompetent, or just plain ineffective.

But there is an alternative.

I propose a radical piece of lateral thinking, and I think it could work to everyone’s benefit.

Ireland has a lot to offer.  We have a young, reasonably well educated workforce.  We are ideally situated as a link between Europe and that other crowd across the Atlantic.  All in all, we are a desirable country.

Here is my idea.

It is so simple, I can’t fathom why we haven’t thought of it before.

All we have to do is look around the world and find an economy that is doing well. Look for a system that works.  Seek out a country that we would be proud to be associated with…..

and offer to join them.

I believe Australia is doing reasonably well.  I’m sure they would be happy to annex us.  They would gain all the trading benefits of having a state within the EU.  We would have somewhere nice to go for the winter.  Of course the would have to ditch the Queen, but that is a very small price to pay.

I’m not that well up on world economics, so I don’t know which economies are doing well.  I know Iceland is out of the equation.  We won’t be joining America which will be a huge disappointment to Harney, who thinks the sun shines out their arses [she has stated that she would rather look to Boston, rather than look to Brussels].

If you are a foreign country, and your books are reasonably well balanced and if you speak English or another language that is reasonably easy to learn why don’t you give us a call?

Our lines are open. 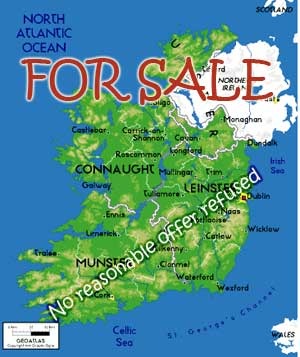