Friday night in Head Rambles Manor can be very fractious.

The battle starts at around seven in the evening and can lead to a lot of bloodshed, though rarely does it involve ambulances.

The victor gets the remote control for the television.

You see, Friday night is the night the Late Late Show is on, and Herself loves it.

This is yet another aspect of the female psyche that I don’t understand.  Herself hates Pat The Plank with a passion, yet she still wants to watch.

I hate Pat The Plank with a passion and would rather watch the test card.  Test cards are more interesting, more animated and have a much better sense of humour.

After some relatively minor cuts and abrasions, Herself won last night and we were condemned to watch.  I would have gone down to the pub, but Friday night is the night Death Watch Beetle goes for his weekly pint and I cannot stand the bloke.

The programme started, and I waited for The Plank to make his smarmy entrance, but he didn’t.  Instead, out popped Gerry Ryan.

I like Gerry as a person, though I’m not a fan of his on radio.  His forays into television in the past have been a bit of a disaster too, so I perked up to see what kind of a mess he’d make of the Late Late.

The guests left a lot to be desired, but then they were probably picked for The Plank and not for Gerry.  We started with Tony Curtis, who looked like he had been wheeled out of his oxygen tent for the interview.  Gerry was a little at sea with that one.

Then there was Roseanne Barr who used to look like Mary Harney but now looks like a woman.

We had to wade through an interview with Daniel O’Donnell.  If that bloke talked any slower, he’d be talking backwards.

Tommy Tiernan came on and Gerry lit up.  Mayhem ensued and Tiernan made it blatantly obvious that he was much happier to be interviewed by Gerry that The Plank.

The show rounded off with Gerry phoning a woman down the country.  He spoke to the husband first but couldn’t understand the bloke.  When he finally got to speak with the woman, he asked her if she was married to an Eastern European.  That was a bit of a gaff, as he was from West Cork.  This flustered Gerry a bit and he happily awarded a prize of a holiday to the woman while forgetting to ask her to answer the qualifying general knowledge question.  Classic!

It would be virtually impossible for Gerry to be worse that The Plank, and he wasn’t.  He was a hundred times better.

But then it’s easy to be a hundred times better than The Plank. 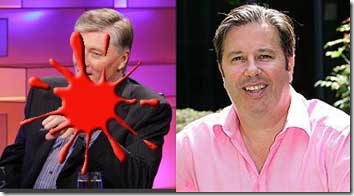