Any problem in Ireland can only be solved by passing a law.

We must be one of the most legislated countries in the world.

The latest inane law to hit the shelves is the brainchild of John Gormless, our illustrious Minister for Cycle Lanes and Wind Farms. 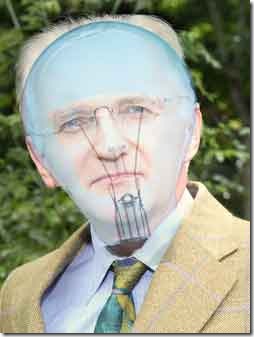 As and from next March, he is phasing in a law to ban the sale of incandescent light bulbs in Ireland.

Any civilised country should be able to educate its population as to the benefits of fluorescent  bulbs, and maybe provide incentives to persuade people to switch over.  But in Ireland, the population isn’t trusted.  We don’t know what is good for us, and the only way to deal with that is to pass a law.

It is human nature, that if you tell someone they cannot do something, they will do their level best to do it.  It is the natural rebel in all of us.  It is our independent streak asserting itself.

I have no problem with CFL bulbs.  I have been using them for years, as they last longer and are cheaper to run.  All but two or three of my lights use them.

There are cases though where CFLs are inappropriate, and in those instances I use the good old incandescent bulbs.

I have a freezer in my garage.  Occasionally, I need to go out to it to fetch something.  When I do, I will need light in the garage for maybe thirty seconds, before I nip back to the warmth of the kitchen.  A CFL bulb needs a period to ‘warm up’.  During that period, it uses considerably more electricity than a normal bulb, and only gives a minimal light.  So, If I install a CFL in my garage, I am going to be using more electricity, and will be poking around in the gloom.

I also have lighting outside the house, where CFLs will not fit inside the waterproof casing.

There are people who have problems with fluorescent lights.  Some visually impaired people find they give insufficient light.  Others find that the flicker gives them headaches.  As far as Gormless is concerned, these people can suffer.  He doesn’t give a shit, as long as he can feel he is singlehandedly saving the world from catastrophe.

Why can’t Gormless provide incentives to use CFLs?  Why can’t he subsidise them to bring their price in line?  He could even introduce a tax on incandescent bulbs to make them more expensive than CFLs.  That would be painful but at least we would have a choice.

Gormless – You are a smug, incandescent twat.