Everyone is waffling on about the Financial Crisis.

I’m not worried about it, for the simple reason that my worrying is not going to change anything.  Are people going to stop selling shares because Grandad is worried?

The whole thing is descending into a farce.  Britain has even invoked a terrorism law against Iceland, for fuck’s sake, and has frozen all their assets.  I wouldn’t say the Icelanders are too worried, as I’d say their assets are frozen most of the year anyway.

Finance was never my strong point.

If I go into a shop and get the wrong change, I’m OK and can cause a financial crisis there until it is resolved, but all this stocks and shares thing has me baffled.

In my simplistic world, I hear about them pumping vast sums of money into the economy to fix things.  At this stage we are talking about trillions of whatever currency tickles your fancy.

I have two questions.

Where is all this money coming from that they are pumping in?  No country can borrow off another, because all are in the same boat.

Where has all the money gone?  Is there some fucker in Wall Street salting away trillions of dollars into a private account for his retirement? 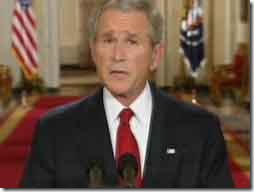 Dubya says not to worry.

I see George W is going to make a speech later today reassuring everyone that everything is grand, and that we must stop panicking.