This is the 12th of July.  It is the height of Summer here in Ireland.

I just lit the central heating.

I am bloody freezing.

To warm myself up while waiting for the house to warm up, I started looking at houses for sale in France.

Fuel is going to get more expensive, and as we get older we are going to feel the cold more.  So one alternative is to radically overhaul Head Rambles Manor and install a different heating system, but that will be expensive to do, and whatever heating we use, it’s going to be expensive.

The other alternative is to find a way where we don’t need so much heating.  Move to a warmer climate.

I only searched for about five minutes when I came across a little place.

Well, when I say little, I mean the following:

Entrance from a front terrace into a well equipped country-style kitchen and open plan dining room , beautiful central lounge has a huge, fully functioning stone fireplace, underfloor heating, high beams, exposed stone and a wonderful galleried landing around two sides, walkway to the open library area, garden is about ½ an acre with a 10 x 5 m swimming pool (fully fenced), barn and a second open barn used as a covered parking area, small ruin at the back of the garden. 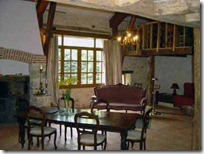 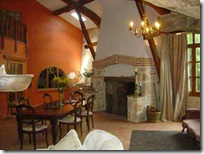 It also happens to be in our favourite part of France.  The temperature there is around 30 Celsius, as it is most summers.

I did some sums.

If we sold this place now [even allowing for the recession] and bought that one, we would have about half a million Euros left over.  Yup – €500,000.  I think that would supplement the pension quite nicely?

Jayzus, but I’m tempted.  It makes sense.  The more I think about it, the more I like the idea.

There is only one problem…..