I think I have tipped over the edge again.

I think I am certifiably insane.  I know most of you think I have been there for a long time, but the tablets have been working well.  Up to now. 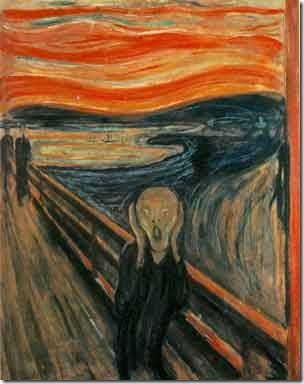 It’s the builders next door.

They start at eight in the morning by hammering on my head.  Actually, they are hammering on my roof, but the effect is the same at eight in the morning.  There are three teams of them.  One team is working indoors.  I think they are building an Olympic Stadium in there.  The house shakes, pictures sway on their hooks and there is a constant rain of dust appearing from somewhere.  The second team is up on the roof.  They are hammering all day, every day.  The third team is out the back, just outside my window.  They are the saw gang.  They are cutting slates with a power saw that screams incessantly and is sending great clouds of dust across my garden.

So if I go into the front of the house, I get the jack-hammers, the crunch of falling masonry and the hammering from the roof.

If I go into the back of the house I get the hammering on the roof and the power saw.

Herself has locked herself in the bedroom and is crying uncontrollably.

Sandy is trying to chew the radiators off the walls.

I have tons of work to do, but at the moment, I’m chewing paper with a pillow tied around my head to try to muffle the noise.

So I am moving.

I don’t know where I’m going.  I might take Herself and Sandy with me [if I can get into the bedroom and calm herself down, and remove that Dimplex from Sandy’s jaws].

I might write on my blog from time to time, but I won’t be commenting much on my blog or anyone else’s for a day or two.  Or a week or two. It really depends on the doctors.

So talk amongst yourselves.

I must go now.

There is a six foot armadillo with a power drill in his paw sitting on the chair beside me, and he wants to give me a cuddle.