Yesterday, I took a pop at American gun control [or lack of].

I got a lovely response from Sear and Hammer.

“Guns are heavily regulated here in Ireland, so the chances of me finding myself face to face with an armed burglar are slim. If any Tom Dick or Harry could buy a gun then, yes, I would feel I would have to own one too. It is a stupid viscous circle.”

Really? And just today the Belfast telegraph announced that there were “900 knife crimes in just one year” in Northern Ireland. I guess you’d say those criminals weren’t armed?

Of course this is after a number of gun bans. So now the UK is talking about “knife crime” and a “knife culture” and people are discussing knife bans. Next they’ll be talking about “brick crime”, “brick culture”, and brick bans. People will be violent whether there are weapons or not. The question is whether or not the victims have the tools they need to defend themselves against criminals. Right now the best tool for self defense is a handgun. Why deprive the law-abiding citizen of the right to self defense?

“If you have guns lying around the place, then people are going to get shot. It is such a simple argument.”

With rights comes responsibility. If you’re not responsible enough to teach your children not to play with dangerous objects and not to leave dangerous objects where irresponsible children will find them then that’s a parenting issue you need to deal with. It’s not an excuse to take away a tool that can be the difference between life and death for a responsible citizen.

I love the way they equate a pot of boiling water to a gun!

I see from your website that you advocate that we should all be wandering around with guns strapped to our hips like a wild west scenario, so I very much doubt you will pay much attention to the voice of reason. You already are committed to arming the population, and propagating the spread of lethal weapons. You won’t be happy until we are all taking pot shots at one another?

OK. Northern Ireland? You say there were 900 knife crimes? So by your arguments, the victims of those crimes would have been armed, and we would now have 900 dead bodies? What would that solve? All you have done is turn a victim into a killer. Nice one.

You talk about banning “weapons” and then descend into the ridiculous. Of all the “weapons” you mention [knives, bricks, cars, rocks, pots of boiling water(?)] only one is specifically designed to kill people – guns. A gun’s sole purpose is to kill [and don’t give me that shit about target shooting]. The others are all designed for other purposes and you know it. You’ll be talking about banning pillows next because people have been smothered with them.

Guns are lethal weapons. They kill. You talk about being responsible, but then talk about teaching children to handle lethal weapons? That is insane. Children are not mature adults. Even mature adults suffer from moments of rage, confusion, panic and irrationality. They make mistakes. They act on the spur of the moment. To handle a gun, you have to be sane, logical, highly controlled in the face of danger and intelligent enough to know the consequences of your actions. How many of the general population fulfil all those criteria?

A gun is the ultimate weapon of no return. You pull the trigger – the victim is probably dead. It’s too late then to realise you have made a mistake.

I have read your site with interest. It scares me.

It shows how far behind some people are on the evolutionary scale, and that saddens me.

It is a glimpse into the mind of the paranoid, and that too scares me.

Even your images scare me; not in the way you intend, but that people like you should try to instil your paranoia into others. 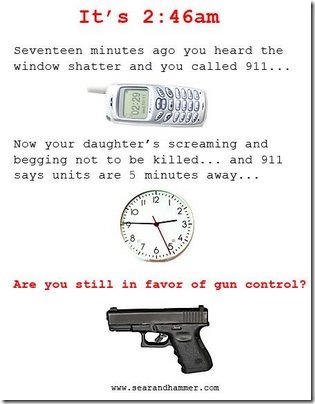 Incidentally, I like your New Year Resolutions You call me the loony left? Thank you for the compliment.

I would far rather be a member of the looney left than a member of a fascist right wing obsessive psychopathic paranoid movement like yours.

P.S. I bet you think George W is the saviour of mankind too?