When I was around four, I got my first tricycle.

I loved that tricycle. I used to scoot up and down the pavements and even the road, because there weren’t that many cars in those days. It was my first real taste of freedom, and I felt I could cycle to China, if only Ireland weren’t an island.

I felt important too, because my mother used to send me to the shops for things. I would go off on my tricycle up to the shop that was about half a mile away. I was much too shy to go in, but that wasn’t the point.

Imagine my surprise when Nancy in America sent me a tricycle! [I can’t link to her blog because she doesn’t have one which is a terrible pity]. It came in the post last week. It’s a little bigger than the one I had as a child. It has a seat for Herself and a place for Sandy.

We love it, Nancy. Thank you very much.

I used it yesterday when I had to box up IrishFlirtySomething’s blog and move it to it’s new home. It was great!

Herself took a photo of us. She was holding the camera which is why you can’t see her. 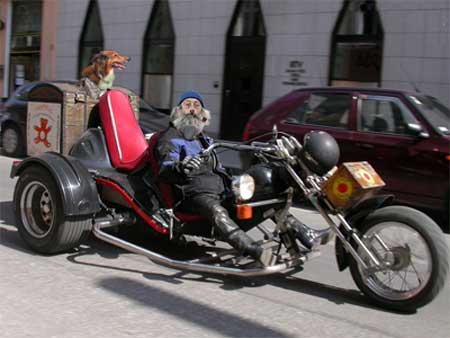