By now you probably know I hate sport.

I have played a little tennis in my time. I played hockey once by accident, and they tried to make me play rugby at school.

The only sport I ever really took to was golf. Well, by golf, I mean par-3. Until a couple of years ago, I had never weilded anything bigger than a three-iron.

It’s an old cliché that retired [or semi-retired] people take up golf. It never occurred to me to do anything like that. It costs a lot to join a club and you need all sorts of things like golf clubs. But I quite like playing. It is a relaxing sort of game. There is no hysteria, like in football. You can talk golf without having to know the name and score of every player back to the 1940s. It is played in pleasant open spaces where you can enjoy nature, and it’s good exercise.

There is something immensely satisfying about a good tee shot. There is the crisp click as you hit the ball square on and then watch as it sails high off over the trees to be followed by the sound of breaking glass and a yell from some unfortunate.

Our K8 was here over the weekend. She told me she had bought some clubs for The Accidental Terrorist for his birthday. He had immediately gone out and completed the set. But he already had a full set which is now redundant. So she informed me that his entire old set is now in my porch. It’s mine.

All I need now is someone to play with and somewhere to play it. None of my pals around here play, so it’s a bit of a problem. I’m going to play around the garden a bit. I have enough space to play with putters and 9-irons and maybe even 7-irons. I’ll have to cut the grass more often though. I can practice my drives by aiming for the neighbour’s windows.

Our K8 is move to a new house close by soon, and she says we are going to play a lot on the course up the road. That sounds great, but I think they’ve closed the course down, which is a bummer. 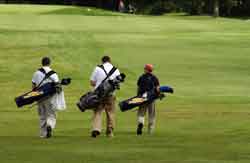 My ambition is to be the first person ever to get a hole in one on a par 5 at the U.S. Masters at Augusta.

Does anyone know where I can get an application form?