I wrote yesterday about Sean, but I do have a granddaughter too.

She must be feeling a bit left out at this stage.

When she was newly born and brought out to the house here, we had to introduce her to Sandy.

So I explained to Sandy that she was a man-puppy. Sandy is very maternal and is very gentle with all living things [except cats, of course]. If a bird flies into the window pane and falls to the ground, Sandy will gently nudge it until it flies off. So I had no real worries about her harming the baby.

Her name has changed over the years to Puppychild. She is two and a half now.

She is a very bright child. She has a great sense of humour, and we always end up in fits of laughter when she is around. 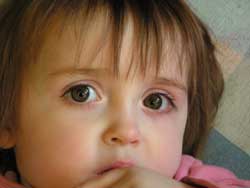 The other day, she was visiting. I was sitting watching her. She was standing looking very solemn, and gazing into the distance. I looked at her over the top of my glasses, because that’s what grandads are supposed to do.

“What are you thinking?” says I.

She turned and looked at me. She stared at me for a moment. Her expression never changed. She then moved over to me, and gently pushed my glasses back up to the top of my nose. She went back to gazing into the distance. I could hear her thoughts –

“Stupid Grandad. He doesn’t know how to wear his glasses. I showed him”.

She also has a great sense of timing. Our K8 told the story of being stopped at a police checkpoint. Any child that would take one look at a policeman and say “It’s a pig” has to be OK in my book.

Our K8 has a stupid dog called Wouldya. When I say ‘stupid’, he is is a league of his own. But I won’t go into that here.

K8 was trying to teach Wouldya some simple commands, and Puppychild was watching.

So now you know why I call her ‘Puppychild’.

Wouldya is booked into school in a year or so. They might be able to teach him something.

Puppychild is booked into the local kennels. She’ll love it there as she loves dogs.

And I just love being a Grandad