I was browsing the Tim Berners-Lee Museum Archives and I came across the original Head Rambles site from the early 21st century. We have the technology now to insert items into historical sites, so I hope you get to read this.

First of all, we [all your descendants] owe you an enormous debt of gratitude. You foresaw exactly where the sea level would rise to, and as a result of your foresight, we now own most of the north of the Island of Leinster. This is one of the largest islands in the Irish Archipelago, so we are quite well off. 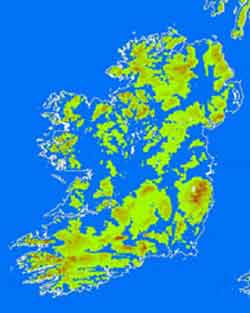 I am living in a lovely seaside chalet on the beach at Tibradden not far from the port of Grandad that you founded near Ticknock. You would love it here. We are surrounded by coconut palm groves, and the view is magnificent across the Dublin Sea to the Down Peninsula in the north and the Isle of Snowdon to the east. The house is partly built into the mountain to help shelter us from the hurricanes and to keep us cool at midday. You would find the 40 degree heat a bit much. 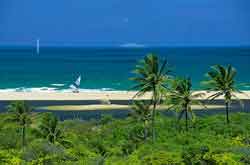 I’m attaching a view from the house. You can just see the Down Peninsula in the distance. No one quite knows what that stick thing is to the left. Archaeologists say it is part of the old Dublin, but I can’t think what it was supposed to be for.

I suppose you would like to know what happened in the future?

As you know, Goerge W went against all advice and launched an attack on Iran. Of course they nuked the US and the North Koreans joined in for the fun. Bush and his cronies were lynched by a hysterical mob and the Radical Militia tried to take over. The Islamic Fundamentalists saw their chance and stepped in. We don’t hear much from the Islamic Republic of America these days.

Of course, they were right about Global Warming, and you will be pleased to note that you were right that it is a natural phenomenon. But before the people realised that, we had the mass riots in the middle of the 21st century. All SUV drivers were lynched and their vehicles burned. All air travel was banned and all aircraft destroyed. It didn’t matter much anyway as at that stage most of the international airports were under water anyway.

There was a strange twist in history at the end of the 21st century. We had a visit from the Xyzzy spacecraft. They dropped off on their inter-galactic journey to a party in Alpha Centauri to say hello to the world. Apparently they have dropped in a few times in the past and were somewhat surprised that we were revering them as gods and prophets. Of course, this put paid to religion, but there are still a few die-hards. The Pope still lives in the Italian Alps with her husband and four children but no-one pays them much attention now.

Of course, with the decline in religion, there was a corresponding decline in wars, so the World is quite a peaceful place now.

Your idea of abolishing elections was finally taken up and worked extremely well. Everyone was happy because they all had a say in things. Unfortunately, that more or less ended with the demise of the Interweb, when all the networks got flooded. However, we have the NeuralWeb now where we communicate directly via thought transference. I don’t know how you coped with all those keyboards and screens and things I’ve seen in the museum.

Television died the death around the middle of the 21st century. It had gotten to the stage where programmes were being stopped every five minutes so people could phone in to vote on what happened next. When this spread to the news channels, and people were voting on how many casualties they would like to see after an accident, the World decided to call a halt, and all channels were taken off the air. The world is a better place for it.

The weather has changed a bit since your day. The winters are the most spectacular with the tornadoes and hurricanes hitting on a regular basis. That old stick thing in the Dublin Sea attracts a lot of lightning so we get some great displays. Maybe that is what it was built for?

The summers are nice. We just laze around supping our Vino Kippure produced from our own vineyards.