When I left school, I went to study electronics in Technical College. Nowadays they call it the Dublin Institute for Technology, but in those days it was just known as Kevin Street.

I don’t know why I did electronics. I wasn’t that pushed about it, but it seemed like a good idea at the time.

Anyway, every year we had an open day where the public were invited in. We all had to sit in the labs and look like we were doing experiments, and had to answer questions from the public.

My pal Noel [in order to protect his identity, I’ve used his real name] and I were given the best one in the lab. We managed to get the experiment with the big oscilloscope and the fancy displays, so there were lots of wiggly lines flasing on the screen, and loads of wires and components and dials and things. It all looked very impressive. 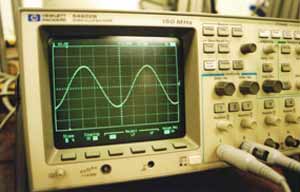 But after the first hour we got tired of talking to people who didn’t understand a word of what we were saying, so we decided to spice things up a bit.

We started telling people about electrons flowing through the ambibombulator down into the flunge where they had explosive reactions with the ether. We were quite inventive.

And as we were making it up as we went along, each demonstation was different from the one before, so people started coming back for the next demonstration. We were the hit of the laboratory.

On old man took a particular interest. He lapped it up, and actually started getting involved.

“So let me get this right” says he “when the electrons zip down the klopper tube they hit the flunge at the end?”

“That’s right” says I “and then the green ones are captured by the gringe, while the red ones carry on to the popperometer”.

About ten minutes later, the head of the college came over.

“I believe you had a visitor to your stand a while ago” says he, “a short chap with grey hair and a bow tie”.

“Thats right” we said. “He was a nice bloke”

“That was the head of the Electronics Faculty of University College Dublin” says he. “He was very impressed with your demonstration. He said you were very enthusiastic and inventive and were very creative in your use of electronics. He said you’d go a long way. Thanks lads for not letting Kevin Street down”.

The old man was standing behind him listening in.

He grinned and winked at us.