What is it about the British and the Euro?

Most countries have signed up to the currency and it is great. You can travel from Northern Germany through any country [except Switzerland] down to South Portugal, and never have to change your currency. 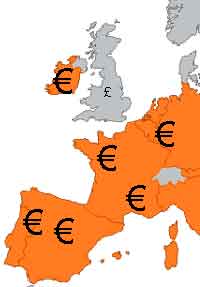 You can look on-line for holidays, and know exactly how much they are going to cost.

You can compare prices when on holiday and know a bargain from a rip-off.

Businesses must love it. They know prices at all times without having to worry about exchange rates. They can print off brochures, and the only thing they have to worry about is language.

I wanted to go to France last year [I want to go this year too, but the coffers are a bit low now]. I looked up French websites and knew exactly how much it would cost.

I booked a place on-line. And what did they do? They asked for a cheque in Sterling!

It transpired the gite was owned by an English woman, and of course they have to be difficult. And awkward.

At one point I e-mailed them and asked what kind of power sockets they had.

I got a snotty e-mail by return –

“French, of course. What else would you expect to find in France?”

“Silly of me. I should have guessed. It would be as unlikely as having to deal in Sterling in the Euro zone”

That shut them up.

As far as I can gather, the only reason the British don’t want to change is because Sterling is British. Rule Britannia and all that.

“Sterling is as British as the White Cliffs of Dover and Roast Beef and Yorkshire Pudding. It is traditional so we refuse to give it up”

To which I reply

“Shooting Brits used to be an Irish tradition. Should we not have given that up?”

So, come on Britain. Grow up. Join the rest of the kids in the playground.

I can travel across Europe and not worry about exchanging currency.

I just want to be able to drive a few miles up the road and over the border without having to come back with a load of useless coins in my pocket.