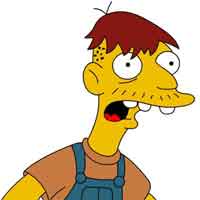 I seem to have upset one of my readers.

I’m sorry Nancy. You seem to have taken exception to my little article the other day. That’s your right. But you are confusing me a bit.

For a start, you take me to task for implying that all Americans are stupid. In fact I said [and I quote] “I said how I didn’t think they were all stupid. Only the ones who voted George W back in.”. I stand by that.

No. The only people who proved themselves to be stupid [and ignorant] were the people who were interviewed. And they were – you’ve guessed it – Americans.

I take your point that the Australians could have interviewed other people. You even provide a list of alternative candidates.

Bill Gates – OK. I’ll give him ten out of ten for constantly nearly getting things right. They never work properly the first time, otherwise why does he keep having to rush out fixes? I certainly wouldn’t buy one of his cars if he made them!

Doctors and staff at the Jonas Salk Institute – I’ll disqualify this one, because there are research institutes all over the world. Some worse. Some better.

Neil Armstrong – Hold on now! He is a fighter pilot who was trained for a different job. He did it well, I grant you but it doesn’t qualify him as a mastermind. I think you are confusing intellect with achievemnt here.

Hillary Clinton – Ex-president’s wife? Senator? How does this qualify her?

The staff at Google Earth – OK. You have one here. Hats off to them.

Oprah Winfrey – Now you are joking! She’s like Pat “The Plank” Kenny on speed with a screechy voice. Disqualified.

Noam Chomsky – A professor. I would expect him to qualify. No problems there.

Thomas Friedman at the New York Times – He’s a journalist. I would expect him to know about things.

The engineers and designers at Boeing – They are designers and engineers. That’s all. The world is full of them.

No Nancy. You are missing the point entirely. If I had a film crew, I’m sure I could travel to the States and interview some great intellects. I’m sure if I brought the same crew around Ireland I could find some right gobshites. But in either case, I would have to do some research first.

What worries me is the magnitude of the ignorance. I doubt there are many people in Ireland who would say that Australia is Iran, just because someone had changed the name on a map?

Incidentally, I did a search on the Internet using the term “are americans stupid” and got 2,930,000 results. Wow!

One I picked at random was quite good

And by the way, Nancy – I didn’t write the above.

Maybe we should start a debate on the American sense of humour?