Herself wanted to go to the city on Wednesday.

I shut her in the coalhole.

She thanked me after, because that day, Ireland had its worst ever traffic jam in history.

Mind you, records only go back to the middle of the nineteenth century, so there may have been longer ones before that. But I doubt it.

Apparently a man dug a hole on the hard shoulder of the N11 in Bray, while 18 men watched him. Note that this was the hard shoulder, not part of the road. But they put up thousands of cones anyway. What the heck. They’re cheap.

Now no one thought to tell anyone about this. The Gardai didn’t know. The AA were very slow on the uptake. But not as slow as the drivers who got stuck in the jam. The jam eventually stretched back for fifteen miles along the M11 and the M50 [if you want that in new money, you can work it out for yourselves]. Some of these people were stuck for over seven hours. 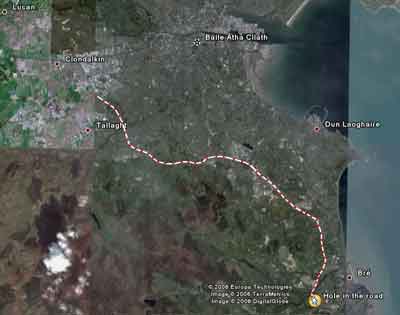 Now when you get to my age, the first thing you think of when you get stuck in a jam, is “Thank God I don’t need a pee”. Of course that thought brings on the urge. And how do you hold onto an urge for six hours??

I could have been in there

And all of this was caused by a bloke digging a hole.

Now some people got wind of this and took to the back roads. But of course they were laying pipes there so the roads were all ripped up.

So some took to the mountains, but they were making a film up there so the road was closed.

So that basically left one road south. But a bloke was digging a hole. The entire south of Dublin and North Wicklow came to a standstill.

Herself has promised that the next time she wants to go to the city, she’ll lock herself in the coalhole.