I have always had my suspicions about George W. I’ve said it before – the funny walk, the vacant stare, the apparent lack of awareness of his surroundings…. 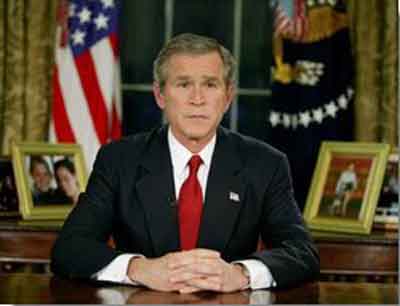 So I decided to do some investigation.

What I uncovered is even worse than I feared.

I have a theory that there is a massive conspiracy to cover up the truth. This conspiracy involves my old friends in the CIA, makeup artists, Hollywood, computer graphics people and God knows who else.

For years now, they have been using holograms and makeup to show us the George W that they want us to see.

I asked a friend of mine in Washington to hang around the White House. I explained my theory, and told him what to look out for. He said I was mad. He said I was deranged.

He hung around the White House anyway just to humour me.

He arrived back yesterday. He was a changed man. He was gibbering and drooling and crying a lot. He managed to give me the photo he’d taken before the nice doctors took him to a resting home with kind nurses and gentle doctors and very high walls.

When I saw the photo, even I was a bit surprised at what I saw. It was worse than I thought.

He had managed to photograph George W out for a ramble in the garden, but without his makeup on. 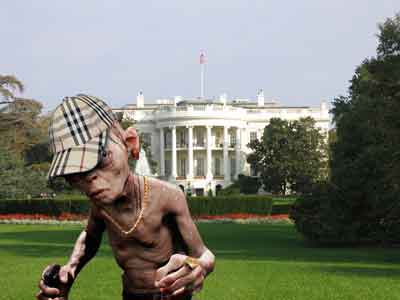